Parklive is a series of 6 free live music and performance events hosted by Falmouth based community radio station  Source FM  in Kimberley Park on the last Sunday afternoon of each month from April to September. Parklive showcases the wide range of creative talent living in the Falmouth area.

The event is community centred and open to local families, residents and visitors to enjoy. We aim to provide entertainment and activities for people of all ages, and for volunteers to learn new skills and make new friends by being part of our event team. Parklive is a great opportunity for new and established local musicians to perform in a relaxed and fun festival atmosphere.

Parklive takes place outdoors in Kimberley Park, Falmouth using the main stage and often a second smaller acoustic stage. Performance slots are typically 25 minutes starting at 12 midday and finishing around 6pm. The running order is available online and on a board near the stage. Changeovers are between 15 and 30 minutes. Performers arrive at least 45 minutes before their slot. Acts are suitable for family enjoyment and are mostly original content. The show is hosted by presenters from Source FM.

As a community event the show is free. Performers and crew take part for no fee. Source FM has stewards on site to help with any queries. Food and drinks are available from the park cafe and mobile vendors supporting the event. There are usually community stalls and other activities and the park has a well equipped play area for young children. No alcohol is allowed on site. The park has toilet facilities. Please use the park bins and do not leave rubbish. You can sit anywhere on the grass. We advise that you bring your own blankets and seats if needed. As this is a much loved public space we ask that you respect the facilities and other people using the park. Please be mindful of others who may want to keep a safe distance to avoid Covid risk.

Source FM and Parklive are entirely volunteer run. We rely on sponsorship, donations and generous public support to keep going. Parklive runs a raffle on site and can accept voluntary donations. Your support buying tickets and donating prizes for future raffles is very much appreciated.

Parklive is subject to the weather. Until the new stage roof and sides are fully completed the show may be cancelled at short notice if there is risk of rain or bad weather. We do our best to make every show happen but can't take any chances with safety and damage to our technical equipment and performers instruments. When necessary we try to make this decision the day before but may need to on the morning of the show.

Click here to find out more about the wonderful team of volunteers behind Parklive:

If you would like to support Parklive or Source FM as a volunteer, provide a donation or raffle prize, give us some feedback or for other enquiries please click here:

Becoming a Friend of Source FM is an easy and most helpful way to support Parklive and your local radio station for just a small annual membership payment. Find out more here: 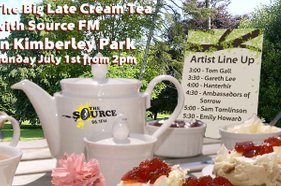 Parklive was born as a result of a couple small fundraiser events in Kimberley Park. Some years ago the Kimberley Park association asked Source FM’s Simon Neild (of the Inside Local Music show) if he could arrange a few music acts to support a fundraiser to help raise money for the new playground in the park.

The event worked well and raised significant funds, and so we decided to organise music for the ‘Big Cream Tea in the Park’ event, another fundraiser. Jules Kay (the head Gardner for the Park) took an active and very important role in bringing this together, and Carey Davies provided PA and engineering skills. Due to the success of this we did another the following year. 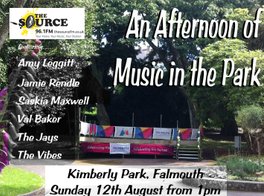 Jules and Simon were so excited about the potential that they had a meeting at which Jules said ‘ We need to keep doing this’ and Simon said ‘ Yes.. Let’s do SIX a year!’  They took the idea to the Source FM station manager who was completely in favour of the project and came up with the brand name of Parklive, and the rest, as they say, is history!

The biggest issue for a community radio station with virtually no funds when putting on such a show is how to we pay for it.  All the acts and crew who participated did so for FREE! We had been very lucky in getting sponsorship from several local Falmouth businesses.  Falmouth Town Council were amazing in not only supporting us but also provided the stage!

Sadly we did not have enough to do the six shows so we decided to hold a raffle and hope it brought in enough money to afford the whole six shows of the series the following year. The prizes were donated by local businesses and generous individuals, the Falmouth community were fabulously supportive in buying tickets and as we were able to deliver all 6 shows. Parklive was alive!

Over the years we have run most of the six shows each year with just a few cancelled due to bad weather. We grew to two stages adding the 'Spoken Word Marquee' bringing diversity to our local program. We kept going even through the Covid pandemic with 'Parklive the Virtual One' live streamed from performers homes thanks to Ivor Richards joining us with his impressively equipped outside broadcast truck.

Parklive is now etablished as a community highlight of the Falmouth calendar and is run by a dedicated group of volunteers who are all Source FM presenters and members. Click here to meet them!

Pictures of 'The Big Cream Tea in the Park

Pictures of 'An Afternoon of Music in the Park'